Phrase of the Day: Poppin’ Off 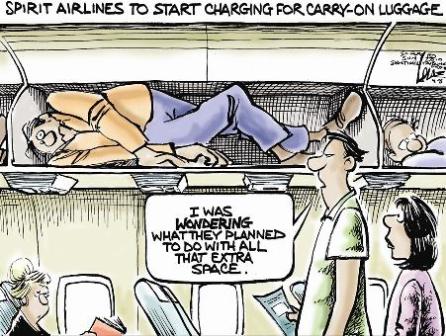 When your bag falls out of an overhead compartment, hits me in the head, and a little kid on the back before crashing to the ground (wtf Cirque Du Soleil performance art bag?), the correct response is “OOOF! I’m so sorry!” I’ll even allow for crazy finger waggling near you face (but just this once). “My laptop!!” though, will never be appropriate.

I was appalled, because I had no idea things would get so much worse. Allow me to introduce “Pops,” an older gentleman, and the father of the kid who was hit in the back, “Wife” the self-involved bag owner, and “Dude” another older guy who happens to be Wife’s Husband.

Pops takes issue with fact that this bag has hit his son. Dude couldn’t care less. Pops thinks Dude, who was the person taking the bag down, should have been “more careful” (no doubt recalling the now-infamous words of the flight attendants “items may shift during take off and landing”). Dude says he couldn’t have been more careful, and that Pops should “Shut the f*** up.”

Oh no you didn’t.

Pops grows furious, and demands an apology from Dude. The kid and I look at each other like the only two sane people on the plane. Because we are.

[effing actually picks up the phone and dials]

Pops: Yes there is a man here yelling and making threats at me and my son and we are on an airplane!

Kid: Dad hang up the phone!

Pops: Yes he is a Chinese Man and he is here making threats because his bag hit my son!

Pops finally begs off and hangs up the phone. All of a sudden there is a clamor in front of and behind us, as people start screaming about what’s happening. I am confused at first, because it seems like these people are yelling at Pops. But that can’t be right, can it? Yep, it was. Apparently Dude was traveling with 19 of his closest family and friends, and they all rushed to his defense, spurred by white hot anger at being called Chinese. I finally understand why Dude has been poppin’ off so hard all this time. He has his whole crew with him! And they all start poppin’ too, because being in a big group of people makes you feel as untouchable and confident and douchey as a gaggle of middle school mean girls. Pops was tryna man up in front of his kid, and Dude and his crew were on some “WHO GON CHECK ME BOO??”

The wife finally chimes in, saying “He already said sorry! What more do you want?!”

I of all people say to Wife “It obviously has nothing to do with the bag! He’s clearly upset because your husband is being rude and screaming profanities at him! In front of a child no less!” because I have somehow turned into that Becky who needs to investigate that weird noise the horror-movie-murderer is making the next room over. (Seriously, I screeched and clamped my hands over my mouth after saying this, because who in the world just took over my body??)

To my exceeding delight, Wife looks at me and sadly shakes her head, sighing “I know . . . I know.” Phew. Not gonna get rolled on by posse of (definitely not Chinese- oh lawd if the’re reading this they g’wan fine me) folk tonight.

Eventually (and way too late, really) a flight attendant came over, basically told Pops there was nothing she could do, and that he should get over it (the only beeyotch working for Virgin apparently). I don’t know how it ended, cuz at the last minute my Blackness kicked in and I got out of there.

(1) I am overly assimilated, and need to spend less time poking my nose around and speaking up, and more time watching Soul Food and the Game and whatever that show is that Tatyana Ali has now. Baby needs a BET moment.

(2) Dropping F Bombs is ubiquitous- there wasn’t a non ESL in sight, but they could all cuss mightily.

Off to watch Madea now.