My Little House of Horrors

It started with a nasty rat bird flying close enough to my face for me to feel the flap of its wings against my nose. I boarded the Cal Train confident that this brush with death and disease was the ickiest thing I would encounter all day.

Given that I follow R.L. Stine on Twitter, this was incredibly naive.
Mr. Stine sent out the following lovely pictures of the timeless Barbie, looking ethereal and pleasant in the midst of a blood bath. 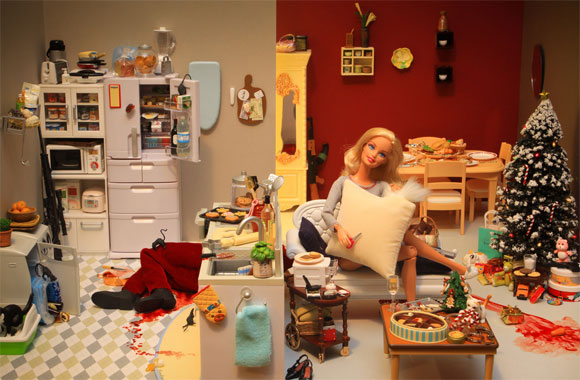 (I never trusted her- anything with a waist that small and a smile that bright is playing for the devil)
Just as I’d recovered from the site of Ken’s head on a spear, a childhood friend of mine (and my queen of the internet idol) tweeted the following:
Katchin05 Video: Might be a bit graphic /hard to watch, but it’s worth your time.
I clicked confidently- I ain’t no punk! Nothing’s to hard for me to watch! “The Cat Killed By Curiosity” is my MIDDLE NAME!
I was wrong. The video was wrong. Everything about that whole thing is wrongness epitomized. Click if you dare, because you probably should, but don’t say I didn’t warn you.
As if the internet wasn’t already a veritable mine field of gore, the real world decided to get in on the act as well. As I write this, I am engaged in a stare off with a girl wearing the same North Face coat that I had in college. College in Boston. But we’re in the Bay Area. Headed South no less. Where is she going?? And why doesn’t the sweat beading up on her forehead bother her like it does me? This is not a dewey glow, but a distasteful, full-on, Jermaine Jackson skin slick  (somebody throw some sand on that ninja!). I suppose it wouldn’t be so bad if she wasn’t peering into my soul with her icy blue, horror movie eyes. I wish she’d stop- I planned to use my soul today.

The real world gets worse still, when I gather the will to break away from her gaze, only to settle my eyes on the person sitting next to her. His feet more specifically. Now I’m an admitted snob when it comes to CalTrain dress, largely because people headed in the Southerly direction tend to be making way more money than me, and are therefore pleasingly fashionable; but even I was shocked by my visceral reaction. Statement of high brow knowledge of footwear or no, I will NEVER EVER EVER EVER accept finger feet shoes to be acceptable dress for the world outside your home. Not only do these things turn your feet into amphibi-alien horrific monstrosities, but they can also kick start an obnoxious conversation about the joys of barefoot exercise. I don’t want to hear it Ghoul.
paz,
dara.